My youngest son, 11, claims to not enjoy reading, but when he finally sits down with a book, he gets lost in the pages. He’s still been reading “No Better Friend“, a biographical story by Robert Weintraub, for a school project. In short, it’s “the extraordinary tale of friendship and survival between a man and a dog in World War II.” 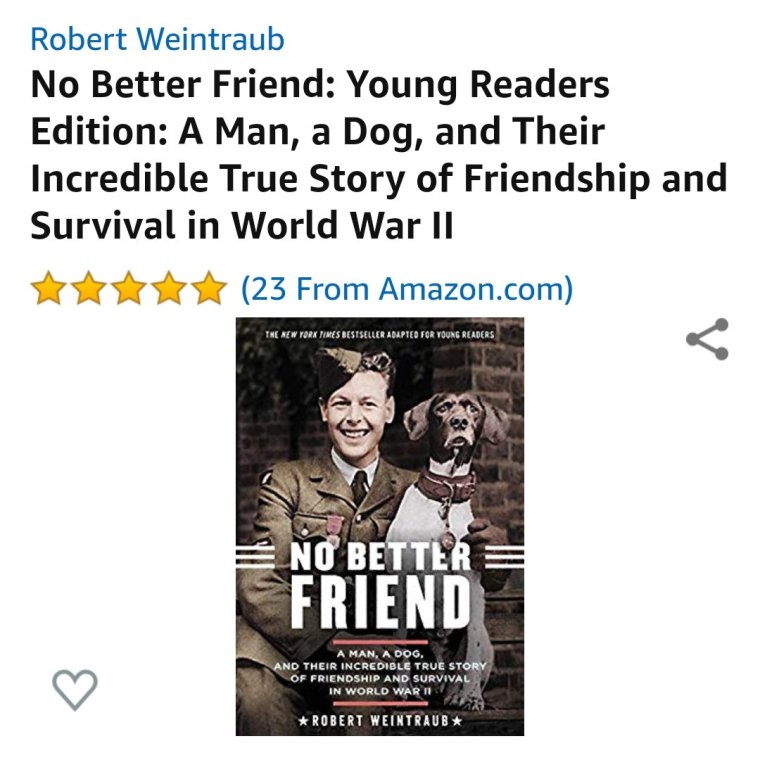 When we were looking for a biography, he had two requirements:

1. There had to be a dog in the story

He approved the description from Amazon so we bought the book. He heard the word “survival” and reason failed – I’m not actually sure how he believed a dog that was alive in the early ’40s would still be here today. He’s been so gripped by this one, that he didn’t see the end coming.

He was sent off to do some reading and I knew he was in the last chapters. All of a sudden he storms out of his room yelling “Doggo died!”. Now at first I had a moment of panic because our old smelly beast had been hiding in his bedroom with him, but no, that impression was cleared up immediately when the smelly beast followed him out.

My bewildered mind was still trying to process the situation when a book came sailing past my head and said boy plopped himself into a chair in the corner and burst into tears. I’m now befuddled and slightly amused.

He’s experienced his first heartbreak at the hands of a book. I wanted to wrap him in a great big bear hug while my shoulders silently shook with laughter and a stray tear found it’s way onto my cheek. We tried to discuss the story and pull apart his feelings, but he needed to let his tears wash some of the pain away. He now understands why I sometimes cry when I read.

He understands the wonder of the word on page and how we can become enmeshed and entangled in a world not our own. To say this book had an emotional impact is an understatement. In our case, he was so highly engaged in the true story of Judy (Doggo) and Frank (the British Radarman) that his young heart was bruised with the loss of a friend. (Mama was just happy that he learned about some of the atrocities of WWII and life as a POW.)

In my books, any story that can evoke such genuine feeling is a win. Not only did it capture the tale of loyalty and friendship of the characters, it spurred loyalty in the reader – a spirited 11-year-old boy. That, my friends, is a well-written story – well-written, indeed!

2 thoughts on “A Boy, A Book, and A Little Bit of Heartbreak”