This time of June I always have a lot of men to think about.   Father’s Day was celebrated, as was our anniversary.    This means trying to find heartfelt and meaningful gifts for dads x3 and something to mark our anniversary without spending a fortune, all while hoping they’re actually appreciated by the recipient(s).   Why does it seem that this is sooooo much easier to do for women?

Our week seemed to be crazy busy as usual and days didn’t go as planned – neither did my gift projects with the boys so we spent a lot of time Friday night trying to complete some last minute (but not unplanned) crafting.   The boys decorated a t-shirt (lots of messy fabric paint!) for Papa featuring their hand prints.  They took special pride in creating cards for Papa & Daddy using my scrapbook supplies – they love picking out the elements and helping to design the layout and even deciding which adhesive to use.  (FYI, the Xyron sticker-maker is their personal favourite, followed closely by foam dots to make things ‘pop-up’.)   We picked up a paper pad (which included matching stickers and elements) by Momenta/ATD called “Family Outings” that seems to be very boy-friendly and they’ve been selecting it for every recent card making venture.  Momenta also has tons of downloads & ideas if you’re feeling ‘stuck’.  Anyhow, I bought the pad for a couple specific scrapbook pages I wanted to do but as it seems to be so popular, I might have to pick up another.

I told my mom the other day that in his old age (ahahaha!) my dad is becoming sentinmental so I found inspiration on Etsy and created a subway-art inspired picture frame.  I bought a budget frame from Zellers (less than $10), painted it white and then sanded it to add some distressing.  I begged Kevin to mirror-print the sentiment on white-backed vinyl (he got smart and brought me home off-cuts so I can use my Cricut to cut my own!)  We applied this to the inside of the glass. I then spent way too much time trying to take a good picture of the boys – Justin with his cheesy grin and Kaleb in tears because he apparently doesn’t “know how to smile nice anymore”.  (*Sigh*  Everything is complicated with my two little monkeys!)  We captured a winner and printed an 8″x10″ sepia-toned copy using our photo printer  All assembled, an easy but priceless gift for less than $10!

Grandpa didn’t get a homemade gift or homemade card (Grandma bought him tools and asked us to all contribute) but he still got hugs and kisses.  Sunday we spent the day at their cottage and the boys made plans to spend some time with Grandma by the lake this summer.  The weather was amazing and the boys went fishing & swimming.  I’m glad they’re getting bigger and more confident in the water – mommy was all set to go in with them but brr, Sturgeon Lake is chilly and they were comfortable with their life jackets if they didn’t go past the dock.

Daddy didn’t get a homemade gift either besides Kaleb’s school creations.  He was showered in love and cuddles in bed and the boys did pick out little things to show how important he is. 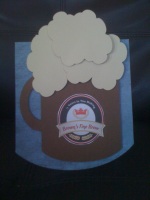 Monday we celebrated our anniversary (with a meal at home – yummy maple-grilled pork chops & granny smith apples, maple balsamic mixed green salad with mandarins & almonds, rosemary french bread – yum!)  It was a day just like every other but I tried to make it a little special.  Kevin said “no gifts!  We just went to California… ”  But I can’t not do a gift of some sort for someone I love so dearly.  Creativity was a little slow in coming but I tried and this is what he received:

* a handmade card with a beer mug (made with my Cricut) and a ‘label’ designed using templates from FreeBeerLabels.com
* a verse I wrote for the inside of the card trying to corelate the card to the gift to our anniversary – not my best work but it did the job:

Grab a bottle, raise a glass
We make a winning team
Think back with affection &
Remember all we’ve seen.


We’ve been to many places.
We’ve traveled near and far.
My favourite destination
Is anywhere you are.


Your love’s intoxicating,
More than the finest brew.
We’ve made it this far, baby!
So cheers to me & you!

* and the gift itself – a variety of beer from some of the destinations we’ve visited together (Red Stripe for Jamaica, Muskoka Cream Ale to represent some local holidays, Corona for Mexico.)  I didn’t come up with this idea until it was too late to try and source beer from some of the other locales we’ve been… but hey, it’s the thought that counts!  After a busy weekend, 7 years of marriage to me (I’m not an easy person to live with!) and life with two rambunctious boys, a beer after a long day at work is appreciated, I’m sure.

After our crazy weekend (& Monday) of celebrations, I’ve been giving more thought to doing one of the local Christmas craft fairs and maybe creating a website featuring some of the stuff I’ve made.  Think it would be worth my while?  And suggestions on what to call my venture so I can keep my personal entity sepearate?   No I don’t mean I need a pseudonym… but a ‘company’ name to throw on business cards.   I’m open to suggestions… and if you have any old wood frames you want to get rid of, please let me know!

Here’s a quick anecdote from Kaleb, the monkey with the funny mouth!   We’re in the car on the way to the cottage and I don’t remember what we were talking about – they were arguing or he was uncomfortable or we had a change in plans.  Regardless, while he’s complaining about whatever it is, I threw out our standard “Well, that’s life, Kaleb.  Get over it.”  To which he replies, “No, that’s pain”.   Maybe you had to be there, but he had us chuckliing.