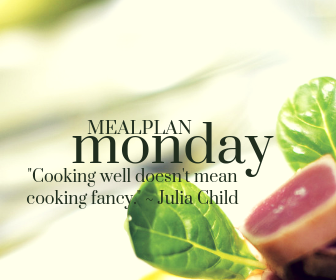 My meal plan last week was geeat in theory, but we didn’t follow it very closely. I definitely prepare healthier food or follow better eating habits when the kids are home. On our own, Kev and I tend to do a lot scavenging and fend for ourselves.

The boys are home tomorrow. (Oh how I’ve missed them…) Even our meal tonight didn’t go to plan. I had a healthy veggie noodle stirfry planned – topped with cashews for crunch and texture – and Kev came home with samosas from a new restaurant that opened in town. Who am I to complain?

I actually prepared a plan for two weeks this time. Next week’s plan is subject to change as I have only done groceries for this plan.

Does anyone have some great budget-friendly, time-friendly school lunch ideas? I don’t know how my oldest isn’t tired of his go-to lunch box formula…

I am here at home surviving the gloomy, overcast pre-spring weather phenomenon of snow one day, rain the other, mud and puddles everywhere. My boys are off enjoying sunshine and swimming pools complaining that they have sunburns.

As it’s just the two adults at home this week, our meals are fairly low effort (because as stated last Monday, I’m lazy… especially when I know Kev *could* fend for himself if need be.)

I didn’t put a thorough meal plan together, but will rely on the contents of my fridge and pantry. In no particular order, some of the meals we’ll be enjoying are:

Is anyone else ready to dig in the dirt and get their lettuce and tomatoes in? I’m craving bruschetta with fresh herbs and tomatoes from the backyard! Pasta with pesto. Zucchini fritters. Salad with handpicked boston lettuce. One of my favourite reasons to garden is the grab and go flavours right there to choose from (but maybe not the weeding.) C’mon spring, you know you want to be here!

This weekend felt like a whirlwind of activity and not a lot of productivity. I hate weekends like that. If I’m going to be busy, at least let’s get things done! It looks like the next two weeks may be following the same trend, but productivity is a key component of the busyness – breakfast meeting tomorrow, some client catch ups, clinic appointments, office hours, school commitments, etc.

Our week started off with a gong-show of a Monday morning. Ontario has been hit with some blustery (don’t-blow-away) winds and wintery whiteout conditions. Certain regions are closing ALL the roads, pulling their plough operators off the roads, and multiple-car pileups are being reported. We were lulled with winter’s ease so far and it decided to boldly remind us that yes, it is still actually snow season in Canada in February. Spring? What spring.

One of our local zones had buses cancelled and then fortuitously, I decided to check whether our bus route (not in the affected zone) had been cancelled as well. I (along with most other parents on this route) felt a little confused because we had just been sent a notification that our buses were running… but our route had been nixed for the morning. Eventually, the other routes in our zone were cancelled as well, and I say good call on this one. It’s miserable out there. It did, however, end up being a quietly accomplished day in the office (and there was no one home to tell J to turn off SpongeBob.) Win.

So keeping in mind the chaos and commitment that is our life this week, here is my anticipated meal plan.